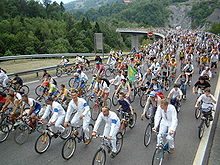 On my way home from work I got stuck at an intersection for about 10 minutes because there was some sort of “bike parade”. There were hundreds of people on bikes going down the street. They passed by the Belmont el station right when I got off. They turned left onto Clark, so I was kind of stuck. For about 10 minutes. As were the cars. As were all the other pedestrians.

I am really getting tired of this sort of thing. When I got back from Texas a couple of weeks ago, the traffic in my neighborhood was even worse because there was some neighborhood street fair. I do not think that I should have to change my routine for any fest or parade or art fair or any of that junk.

All people did during this fest was get drunk and make a lot of noise. Which is usually what they do in that part of the neighborhood when there is no fest.

If our new mayor wants to make Chicago a better city and if he wants to make it more business-friendly, here is my suggestion: end all of these fairs, fests, parades, etc. I want to live someplace where I can just go from Point A to Point B without anything unexpected getting in my way. I leave. Then I arrive. That is it. I honestly would not recommend that anyone move to Chicago. I really do not care about taxes. I just want to go about my business.

Going back to the bike parade: I am pretty sure that it had some sort of city sanction or permit. There were quite a few police officers in the parade. I am not sure what the point of it was. Was it to encourage people giving up their cars and bike more? If so, I guarantee it was a failure. It made bad traffic even worse. If you are the reason someone is spending even more time in traffic, they will not listen to what you have to say on transportation.