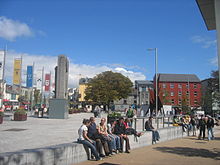 I am a regular listener of Freethought Radio, which is produced by the Freedom From Religion Foundation. One of their activities is to prevent or stop government endorsement or support of religion.

When they talk about this, they will sometimes use the word “public” to describe the activities in question.

Usually it is something like prayer at city council meetings, or a city or county giving money to a church. They will describe it as “public support” or “public endorsement” of religion. This is the same use of the word “public” that we use when we say that the University of Illinois at Urbana-Champaign is a “public” university.

Many of the opponents of the FFRF will use the word “public” differently when they attack the FFRF. They say that the FFRF wants to eliminate “public expression” of religion, or they want to “take religion out of the public square”. Here, I think the word “public” has a slightly different meaning. Here “public” means being a part of society, and does not refer to government support. Sort of like when parents tell their children to behave in public.

I wonder whether some critics of the FFRF are intentionally misleading people by this use of the word “public”. The FFRF does not have a problem with the “public expression” of religion, or of religion being in the public square. There are a lot of billboards put up by churches and religious organizations, and the FFRF does not try to have them taken down. The FFRF does put up its own billboards as well. They have no problem with religion existing in society. They simply do not think it should be supported by our government. And for the most part the courts agree with the FFRF.

There are some government entities in the United States that do own shares in public companies. These tend to be the retirement funds for workers in the public sector, usually at the state, county or city level. Many people in the US do not like the idea of governments owning a company, yet public retirement funds is not considered a problem. These funds are generally given some independence from the governments whose workers’ money they are managing. Some of these funds (such as CalPERS) have been activist shareholders, but their goals are no different than other activist shareholders. Some retirement funds invest largely in index funds. But these retirement funds never get a majority stake in companies. At least not in the US.