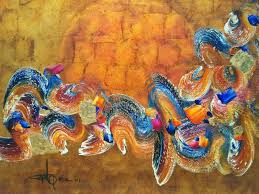 Here is the dividend income report for February, 2017.

There is not a whole lot to report this month. I did buy Aqua America, which pays in “C” months, but I did not buy it in time for the March payout. Long term, baby, long term.

Here is a table with the year-to-date amounts, the monthly amounts, and the three- and twelve-month moving averages for each February from 2012 through 2017:

Here are the stocks and the income amounts for February, 2017:

Untitled painting from 2001 by Pakistani painter Ismail Gulgee (1926-2007), assumed allowed under Fair Use.